My Loftiest Goal EVER – Can Australia be Number #1 in XCO by 2032 Olympic Games?

Having just returned home from the recent 2019 World Champs in Mont-Sainte-Anne, Canada, I have been inspired by the courage of our Australian athletes and how well they all raced! Now I’m back home in Australia sitting here watching Redbull replays of the Snowshoe World Cup and I got to thinking; Wouldn’t it be awesome if Australia was ranked 1st in the world for XCO Mountain biking?

As I sit here today, Australia’s current XCO Men’s ranking is 21 and Australia’s XCO Women’s ranking is 13. If you want to know how the country ranking works, I have put in some more detail at the bottom of this post but put simply it’s the summation of UCI points of a nation’s best 3 riders. A nation’s ranking determines the number of spots that nations can contest at an Olympic Games.

After all the data crunching has been completed, it’s likely that Australia will only qualify 1 male and 1 female rider for the 2020 Tokyo Olympics whereas the top 2 nations qualify up to 3 riders and nations ranked 3rd to 7th qualify 2 riders for each gender.

Almost single handedly, Bec McConnell has Australia’s female rank at 13th and she herself is currently ranked 4th in the world for XCO and has had an extraordinarily mind-blowing year. Australia needs multiple Bec’s (x3) to increase our country rank.

Australia’s XCO future does look bright with some very talented Australian youngsters performing brilliantly on the world stage with Zoe Cuthbert from Trek Shimano Australia Team placing 5th in the Junior Women’s race at the recent World Champs in Canada and Cameron Wright  from Giant Factory Off-Road Team  18th in U/23 Men, but again we need multiple Zoe’s and Cam’s. 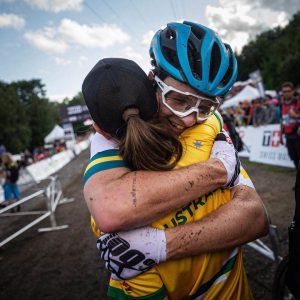 So, here is my open declaration…By 2032 Olympic Games, I want to be able to say that Australia is ranked 1st in the world for XCO Mountain biking in both Men and Women’s.

1. As of this morning, Brisbane, Australia (where I live) is putting their bid forward to host the 2032 Olympic Games here on home soil in 2032!!!!! Fingers crossed!
2. We will need that long to put in place the processes we need to have athletes winning at the highest level.

So that’s it, that’s one of my life’s goals! Lofty? Bloody oath it is! I know I am not alone in saying the Australian Mountain Bike Community would also wish this dream became a reality! What Australian Mountain bike fan wouldn’t? Who wouldn’t want to watch our screens and see our Aussie riders on the podium at every World Cup, World Champs and Olympic Games?

Some may say there are barriers for Australians reaching the pinnacle of XCO which is currently dominated by the Swiss, French and Italians. Some of these might include;

THESE AREN’T BARRIERS, THESE ARE OPPORTUNITIES! All of them can be overcome! If we all band together; if we all have this same unified goal, then who knows what we can achieve or what is possible? We must try at least! One thing I do know, is that I can’t do this alone!

4.11.005 A ranking by nation for men and women is drawn up for cross-country Olympic only. The ranking by nation is calculated by summing the points of three best placed riders from each nation. The UCI points awarded for the team relay event at the world championships and continental championships are awarded to the nation in the elite ranking and not to the individual riders. A rider’s points are awarded to the nation of his nationality, even if he is a licence-holder of the federation of another country. Tied nations have their relative positions determined by the place of their best rider on the Individual ranking. (text modified on 1.10.13).

My speciality is helping serious and recreational mountain bikers break through plateaus to attain higher levels of performance so that they can get fitter, faster, stronger and win more races!